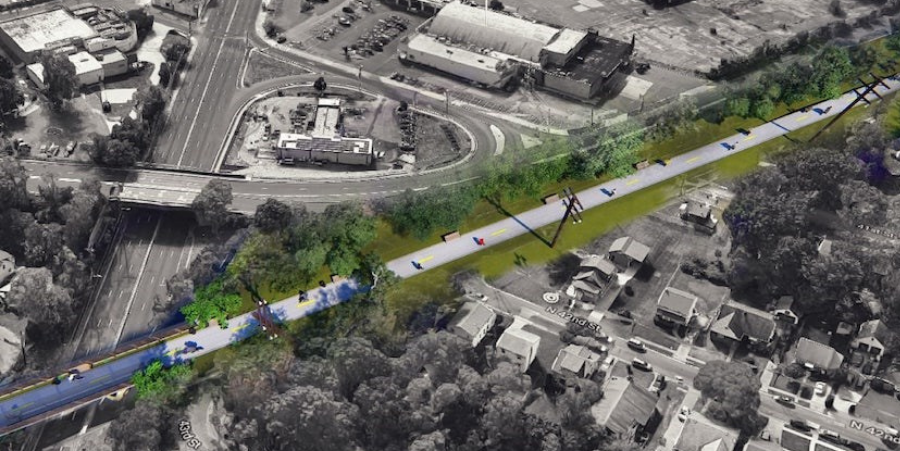 Wouldn’t it be amazing if there was a convenient way to go between Camden and Burlington counties by foot, bike and wheelchair without worrying about car traffic, all while being able to enjoy multiple parks and the Camden Waterfront along the way? Enter: the aptly named Burlington-Camden Trail.

When complete, this trail will span 10 miles, connecting the two counties by way of Petty’s Island, as well as Pennsauken and Merchantville. Thanks to its potential to close a critical gap in the Circuit Trails’ developing 800-mile network, serve a large number of people and ensure greater equity in trail access, the Burlington-Camden Trail has been named a priority project by the Circuit Trails Coalition and Camden County.

The unused railroad bridge over Route 130

Earlier this year, Pennsauken Township and NJ TRANSIT reached an agreement for pedestrian use of the unused railroad bridge over Route 130, an essential hurdle that helps move forward potential plans to use the area as an important link for the Burlington-Camden Trail. Under the agreement, NJ TRANSIT, the owner of the bridge and the adjoining right-of-way, will be responsible for the upkeep and maintenance for the bridge, and the Township will maintain responsibility for the off-bridge portion of the potential trail.

With the limited pedestrian crossings along Route 130, when developed, this new car-free way to safely cross that section of the highway will be an extremely welcome addition to the local community and improve connectivity across the region.  Local residents are looking forward to seeing this portion of the unused railroad corridor activated so that can be used for community events, spending time with loved ones, traveling, enjoying nature and getting exercise.

Circuit Trails Coalition New Jersey Vice Chair Sonia Szczesna in front of the corridor while fliering in the community.

This landmark agreement in the Burlington-Camden trail’s development was an important step needed to advance the project. This progress couldn’t have been possible without the support of local leaders and champions for the project, residents, and members of the Circuit Trails’ Camden County Action team. Former Mayor Betsy McBride, a strong advocate for the project, shared, “It is exciting to get to the point where we can really feel our efforts to create community connections and improve the quality of life for residents coming to fruition.”

Mayor Marco DiBattista also acknowledged the agreement and meaningful impact of the project by stating, “As a Township, we’re dedicated to enhancing Pennsauken’s open spaces for our residents to enjoy. [The Pennsauken] Township Committee is extremely thankful for the invaluable help of New Jersey State Senator Jim Beach; this agreement with NJ TRANSIT doesn’t happen without his involvement,” said Pennsauken Mayor Marco DiBattista. “We also applaud the efforts of organizations like the Rails-to-Trails Conservancy, as they work to promote the importance of multi-use trails throughout our region.”

Next steps involve completing two separate, fully-funded design processes: one for Euclid Street to 34th Street (including the bridge) and another for Cove Road to Bethel Avenue. Partially-funded construction between Euclid Avenue and 34th Street will close the three-quarters mile gap between the popular “Merchantville Mile” and the Dudley Grange Park Trail. On the east end of the “Merchantville Mile,” construction funding has been obtained, which will provide a quarter-mile extension. Once the two new segments are complete, 2.25 miles of continuous trail will be open.

To add to the excitement, the on-road portion of the existing route in Merchantville will be realigned to an off-road alignment. The construction of this project is estimated to be completed this summer.

Furthermore, thanks to funding from the New Jersey Department of Transportation, a concept plan has recently been completed regarding the connection between Pennsauken and Maple Shade. The feasibility of connecting Stockton Station and Von Neida Parks to the Camden Waterfront must also be studied to continue working towards the vision for this transformative community connection.

This is a tremendous step for the Circuit Trails network and win for the community. To stay up to date with this project and to get involved, please join the Circuit Coalition’s Camden County Action Team and the Connecting Trails Facebook group.