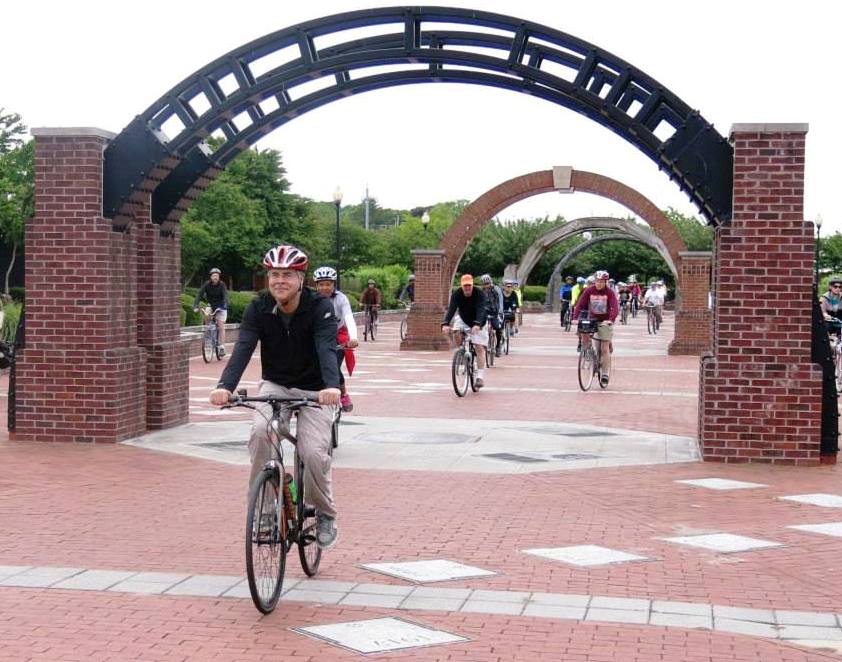 In this installment of Circuit Trails Spotlight, we connected with Jay Watson, vice president of D&R Greenway Land Trust – central New Jersey’s nonprofit land preservation organization. We caught up with Jay about D&R Greenway’s work as part of the Circuit Trails Coalition, the importance of trail development, and of course, his favorite trail #onthecircuit – plus much more!

How did you become involved with the D&R Greenway and the Circuit Trails Coalition?  What does your role within both organizations look like?

I only joined D&R Greenway Land Trust in 2010, but I have had a much longer relationship with the organization. Before coming to work here, I spent nearly 30 years with the New Jersey Department of Environmental Protection, most of which was in the Green Acres Program which provides funding for open space preservation and park development. I have also been a bicycle advocate for many years and was a founding member of Trenton Cycling Revolution.

At D&R Greenway, I am primarily responsible for land acquisition and land stewardship, but also manage special projects. We first became involved with the Circuit Trails Coalition through a grant from the William Penn Foundation to work on the D&R Canal/Delaware River Heritage Trail Gap Connection in Trenton. Our current objective related to the Circuit Trails is to create a dedicated trail from the Bordentown City Riverline Station to Trenton’s Battle Monument, the main intersection of the D&R Canal Path. While this section is only a couple miles long, it will vastly expand the reach of the Circuit Trails through the connection to the D&R Canal Path. Along the way, we want to provide interactive experiences that teach people about our natural resources, particularly around water quality.

How is being part of the Circuit Trails Coalition helping the mission of the D&R Greenway?

Since 1989, D&R Greenway has been preserving and managing land for public use and for protection of our natural resources. Part of our mission is to develop a conservation ethic, and we work hard to get people out into the landscape to enjoy all of its splendor. The Circuit Trails Coalition has been an outstanding forum to see what others are doing in our region and it has brought together some outstanding professionals with whom we are working to link us all together through this multi-use trail system.

You’ve been recognized for your expertise in land preservation and park development. In your opinion, what impact does trail development have on the greater community, especially in urban areas?

It is no secret that well maintained and used trails can serve to bring people and communities together. One thing that I think goes unnoticed in the urban setting is how many people are using bicycles as their primary mode of transportation. It is expensive to own, insure and operate a car in New Jersey and many of our residents are on bicycles out of necessity. We should do everything we can to make sure that they have safe and convenient routes. One great leap forward in New Jersey has been the accommodation of bicycles on buses and trains. This alone has really expanded the territory in which individuals can pursue work, recreation and happiness.

You’ve also organized plenty of events on the Circuit. Is anything in the pipeline for 2017?

Our trail segments pass through some of our nation’s most important and notable historic sites. This past April, we led a Monuments Ride, from Trenton’s Battle Monument to Bordentown’s Thomas Paine statue. We held this ride to demonstrate the value and simplicity of formalizing this connection and used the two premiere Revolutionary War Monuments as the ‘hook’ for the ride. We also help organize the Tour de Trenton and the Lawrence Hopewell Trail/Mercer County Park Commission’s Full Moon Bike Ride, a nighttime ride through Mercer Meadows. The 2017 Full Moon Bike Ride is scheduled for September 9th and please keep an eye out for the Tour de Trenton this summer!

What is your favorite Circuit Trail and why?

There are so many segments that I want to explore (Schuylkill River Trail being the first one on my list!), but for now, I have to say that the Lawrence Hopewell Trail through the incredible Mercer Meadows County Park is my favorite. Bicycling through a 1600-acre wildflower meadow in the middle of New Jersey is an amazing experience. The meadow is like an ocean scene, always changing with light and season. Just amazing.