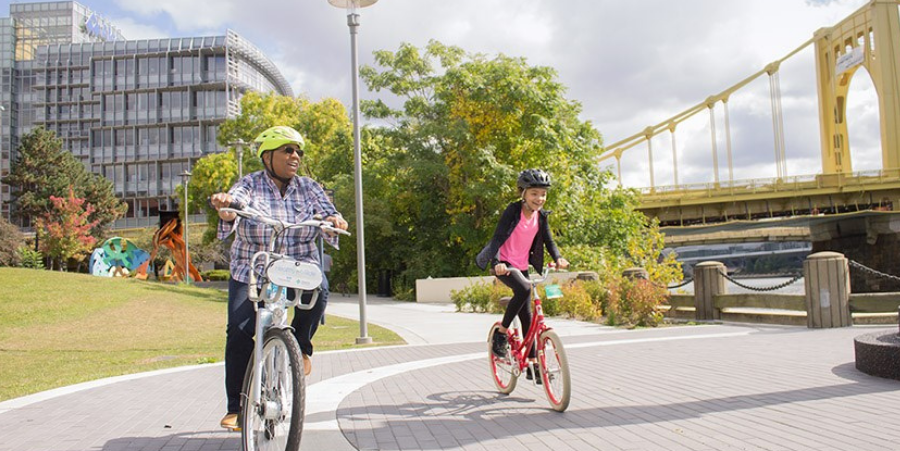 Included in the Centers for Disease Control and Prevention (CDC) website pages dedicated to COVID-19 is a section about the potential effects of the coronavirus on our mental health.  “Pandemics can be stressful,” it reads.

Indeed. Fear about a new disease. Concern about the health of your loved ones and your own health too. Instability and insecurity around finances and jobs. The isolation that comes along with proper social distancing. The CDC lists all of those as reasons why anxiety can build during the coronavirus. How many people read that and thought, “Check, check, check ….”?

One significant way millions of Americans are addressing their mental health needs during the coronavirus is through frequent activity in the outdoors. In Lincoln, Nebraska, where I live, the city’s robust trail system has been packed with more bicyclists, inline skaters, runners and walkers than I’d ever encountered before in a spring trail season. In fact, the Great Plains Trail Network (GPTN)—comprising more than two dozen trails spanning over 131 miles—was compelled, like many trail systems across the country, to issue cycling etiquette reminders to recent trail converts in the newspaper after trail use surged.

A recent Rails-to-Trails Conservancy (RTC) survey shows that quite a few people across the country are seeking out trails for stress relief during the pandemic. Forty-six percent of the respondents said that access to open spaces had reduced stress levels during the pandemic, and 66% of respondents said they were getting outside at the same level or greater than before the coronavirus.

“It’s as important as ever for people to know that when everything is out of control, one thing you can control is [going outdoors and taking] advantage of natural resources,” said Dr. Sam Zizzi, a psychologist who serves as the Co-Director for The Center for ActiveWV in West Virginia.

One minor blessing about the coronavirus, said Zizzi, is that at least it didn’t start in November—and people in frigid climates didn’t have to wait months to spend valuable time outside. But it was still pretty cold in Morgantown, where Zizzi lives, in mid-March, when social distancing measures went into effect, and businesses, schools and everything else began closing.

“I think there was pent-up energy there after a few weeks,” said Zizzi, who is also a professor of sport and exercise psychology at West Virginia University. “People weren’t going to work. You had this lack of a difference in your environment. I was noticing it immediately.”

Once it warmed up, he and his family were out the door—taking family walks on the nearby Mon River Rail-Trail System—an award-winning trail system recently inducted into RTC’s Rail-Trail Hall of Fame—and visiting forests and state parks.

“For many, many years, I have used physical activity for mental health,” he said. “It was just a natural thing for me and for us to do that.”

Zizzi teaches his students that, for many people, getting outside and being active offers both “prevention of increased stress of becoming mentally ill perhaps, and treatment if you are a person who experiences clinical anxiety or … that is diagnosed with depression. I think it can go both ways for sure.”

At The Center for ActiveWV, the staff promotes simple forms of physical activity in an effort to get more children and adults in the state to meet or exceed national physical health recommendations. A 2018 study found that 28.5% of West Virginian adults didn’t participate in physical activity or exercise in their spare time.

“We’re not trying to encourage people to go hike mountains,” said Zizzi. “We’re really trying to get people to walk more and take advantage of what we have in West Virginia, which are a lot of green environments. In COVID, we wanted to hit on the fact that this is a really big mental health issue—more so because people are experiencing all this anxiety, the stress about being home with your kids, the stress about jobs, finances.”

Even being on trails, or in green space or blue space, can be beneficial regardless of your physical activity during that time. To that end, Zizzi is a proponent of forest bathing, citing the physiological benefits measured in a Japanese study of urban dwellers. Taking people from the city out to the forest, and encouraging them to take in smells and sounds, led to improved stress responses that lasted days and weeks longer than the time they spent in nature. As little as two hours spent in nature has been shown to provide lasting effects. Zizzi and a colleague, Christiaan Abildso, discussed with an NPR affiliate a few years back.

In that same conversation with West Virginia Public Broadcasting, they also spoke about a significant lack of access to green spaces in rural West Virginia.

“The research I have done with my colleagues around here is it is all about connectivity,” Zizzi said. “So you can have beautiful trail access points, but if you can’t get there safely—no crossings, no bridges—it’s a huge barrier, even for people who live super close to that resource.”

“What we think is a positive … we hope this is not a one-time thing, that this isn’t a brief moment in time that people decided to get out on the trails, but that this is going to be a lasting thing you can do with your family,” said GPTN Board Member Dena Noe. “I hope there’s a long-lasting outcome from the fact that we were working at home and our children were not in school, so we needed to get out, and there were the trails to do that.”

In both remote rural communities and underserved urban areas, lack of trail access determines who is using them.

A 2019 survey taken by nearly 700 people in a series of New Jersey parks and conducted by the Alan M. Voorhees Transportation Center at Rutgers University showed that proximity “appears to be the most serious concern for people not visiting parks.” The same year that survey was published, New Jersey Sen. Cory Booker introduced the Transit to Trails Act, which would establish a grant program to fund projects that “make transportation to green spaces and public lands more accessible for critically underserved communities.” Then in July 2020, the U.S. House of Representatives passed the Moving Forward Act, which includes—among other funding investments—$250 million for FY 2024 for Active Transportation Connectivity Grants designed to fund links between existing walking and bicycling facilities.

The CDC reports clear evidence that racial and ethnic minority groups in the United States are being disproportionately affected by COVID-19, and that health-care access, or lack of it, is a key component of the problem.

That lack, among others, said GirlTrek founder and COO Vanessa Garrison, is nothing new. “Black people are always in crisis in this country,” Garrison said. “The coronavirus had to get in line with the other crises.”

What the pandemic has done for Garrison is reinforce the importance of her nonprofit’s goal to mobilize and unite Black women and girls through the act of walking together through their neighborhoods and in the footsteps of the civil rights movement leaders.

“Because GirlTrek’s mission has always been around the public health crisis that is facing Black women and Black communities, and because COVID was a pandemic that actually just underscored for the country how vulnerable Black and Brown communities are especially, our work actually just became more relevant and more urgent to communities that otherwise had not been paying attention to the crisis,” Garrison said.

The message has resonated. Ten years in, GirlTrek is closing in on encouraging 1 million Black women and girls to lace up and join forces.

The mental health benefits of walking, alone or together, have been prevalent in GirlTrek’s message since its founding. In a testimonial posted on YouTube in 2012, GirlTrek CEO T. Morgan Dixon talks about battling unaddressed depression, a kind that she tried to self-medicate by throwing herself full-speed into her work. She started walking for ambitious purposes too; she wanted to run a 5k. Now, she says on the video, she “treks” for emotional healing.

The pandemic, and the requisite need to practice social distancing, has momentarily prevented the large group walks that GirlTrek organizers have been leading in cities and towns across the United States.

“Yeah COVID took a huge hit to that, because gathering in a large group hasn’t been safe,” Garrison said. “That was an especially (big) hit for our community, because women come to GirlTrek not for the physical activity alone—and usually not for the physical activity at all. They’re coming because there’s an underlying crisis in this country of isolation and loneliness, of trauma and stress. The community that GrilTrek builds becomes a lifeline for those women. COVID snatched it away.”

To take it back, Garrison and Dixon are focusing on storytelling that GirlTrek walkers can join in on in real-time, or when they can, in the form of a podcast project launched in June. It’s called Black History Bootcamp (podcast available via Spotify and Apple Podcasts), and the latest round of episodes is being released this month.

August features 21 episodes centered around civil rights figures and moments, both well-known and under-the-radar, as discussed by GirlTrek’s founders. (James Baldwin, Mary Church Terrell and Claudette Colvin are three of the August subjects.) Garrison and Dixon converse not only about the contributions of the subject but also about the “vulnerable issues we are experiencing as Black women.” The podcasts are about 30 minutes long, though some run longer, Garrison said, because, well, they love to talk.

In each description from that last paragraph, there is intentionality. They released 21 episodes because of the habit-forming properties connected to that number. The episodes are 30 minutes long, because the CDC recommends people complete a half-hour of physical activity five times a week to improve their health. And the podcasts are initially released as call-ins to Black History Bootcamp subscribers. They get an email with a phone number, and can put their walking shoes on and listen to it in real-time.

Baltimore, Maryland | Photo by Side A Photography

“We intentionally make the conversation raw and vulnerable so that people can feel like they are walking with us directly, and so that they can feel like they are walking with the hundreds of thousands of other people who tune into the podcast,” Garrison said. “And it’s necessary in these times, not just because people are isolated and have to physically distance. But how do we even begin to process everything that’s going on? Walking and listening to the podcast helps with that.”

In the spring, the Center for ActiveWV focused its messaging around the benefits of getting outside, said Dr. Zizzi. And, this fall, the center will be focusing on programming for children whose physical education classes are going to be changed by the pandemic.

For both cases, a new initiative developed in Morgantown could align to offer a stress-reducing outlet.

In response to the pandemic, Morgantown, like many U.S. cities, has designated a set of “Healthy Streets” for pedestrians and cyclists. Zizzi said that the Healthy Streets have been vital, accessible outlets for people in this uniquely stressful time.

“I think it’s a beautiful, equitable solution,” Zizzi said. “You need both in the community. You need local stuff that is truly right out your front door, because right now everybody is at home. You need that, plus you need destinations where multiple generations can go and be, which is one of the greatest benefits of a rail-trail. You can bring everybody there.”