Looking Ahead: Three Projects Coming Soon On the Circuit

With a burgeoning network of trails on the Circuit, one thing is certain – there is always something new to look forward to! Thanks to the hard work of trail planners and developers, support of local governments and the advocacy of trail users like you, the Circuit Trails network becomes home to highly anticipated new trails and outdoor space each year.

Across the network, from Pennsylvania to New Jersey, new trail projects are on the horizon. As we ride into spring and prepare for the Rails to Trails Conservancy’s Opening Day for Trails on April 13, we also look forward to an especially exciting round of additions that will soon be added to the list of places you can explore on the Circuit.

After years of planning and development, Gateway Park in Camden, NJ will make its official debut Monday, March 11. The new park alongside the Cooper River will connect to the downtown Camden waterfront. The 25-acre property, with bike paths on the Circuit, is set to be a destination where local residents can exercise, fish, learn about nature, join organized health and recreation programs, and explore the Cooper River in kayaks and canoes.

The long-awaited opening a cause for celebration. Mark your calendars and help us dedicate the new addition to the Circuit on March 11 at 11 a.m.! 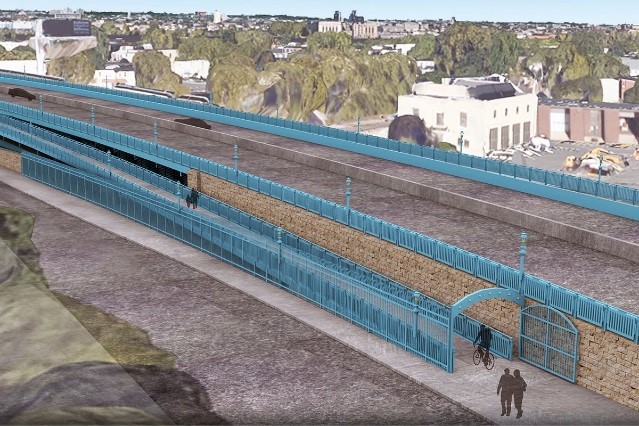 Yes, it’s almost here! After years of carrying bikes up and down the staircase on the New Jersey side of the of the Ben Franklin Bridge Walkway (which is a trail on the Circuit!), travelers can rejoice. A bike-accessible ramp, currently under construction, is set to be finished and ready for use this summer.

The new ramp on the south walkway of the bridge will measure 770-feet long and 10-feet wide – a small but mighty addition that has been highly anticipated. Since the Ben Franklin Bridge serves as a direct link from Pennsylvania to New Jersey, we are happy to see accessibility and connectivity improvements being made to make sure that runners, walkers and bikers alike can use and enjoy the trails #onthecircuit!

This year will also bring to completion another major connector on the Circuit – this one in the form for a swing bridge on the Schuylkill River Trail. Those who have been following the process of the renovated bridge know that it will fill in a major gap on the Circuit, connecting over the river from Grays Ferry Crescent on the east to Bartram’s Mile on the west, which also connects to the 58th Street Greenway and Cobbs Creek Trail.

The new bridge takes the place of the old swing truss bridge, which was built in 1902 for the Philadelphia, Wilmington and Baltimore Railroad. The completion of the Schuylkill Crossing Swing Bridge will also serve as the only operable bicycle and pedestrian swing bridge in North America.

Are you buzzing about these key additions to the Circuit Trails? We sure are! To stay in the loop on trail improvements, ribbon-cuttings, future plans, events and so much more, be sure to follow us on Facebook, Instagram and Twitter.