This blog was orginally published on the Bicycle Coalition of Greater Philadelphia’s blog in Decemeber. 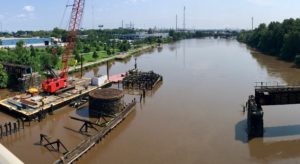 The Circuit Trails made significant construction progress in 2018, but there were even more funding wins and expanding Circuit Trails outreach efforts in the Greater Philadelphia Region.

Here is your annual Circuit recap for 2018.

PA Transportation Alternatives funds several trail projects. The Parkside Cynwyd Trail Extension into Philadelphia from Bala Cynwyd (and we’ve just used up all of our “y” allotment for this blog. Thanks Wales…), Shawmont Station restoration, and several other projects along The Circuit were funded. Click here for full details.

TASCC Narberth Gets Off To a Roaring Start. Standing for “Technical Assistance for Suburban Circuit Communities,” TASCC is a new initiative of Bicycle Coalition that seeks to improve community connections to The Circuit via enhanced low-stress road networks. Regional Planner Leonard Bonarek met with a small engaged group to make plans, and then we had a brunch launch of the project, which was quite well attended. The first TASCC project looks to connect downtown Narberth with the Cynwyd Heritage trail via low-stress on-road routes. Lessons learned from this pilot program will feed a TASCC advocate training workshop series that we look to launch in 2019.

Senators Bob Casey and Pat Toomey announced that the Trump Administration had approved a $12 Million TIGER grant for the Christian to Crescent Connector. This bridge-like structure that will hug the eastern side of the Schuylkill River and connect the Schuylkill Banks trail that currently ends in the vicinity of Christian Street all the way to the Gray’s Ferry Crescent trail and park. This was the biggest administrative hurdle to clear to get the SRT completed from Reading, PA all the way to Bartram’s Garden in Southwest Philadelphia.

The South – Christian segment of the SRT officially opened. This short bit of trail gets us that much closer to connecting Center City Philadelphia with Bartram’s Garden, Southwest Philadelphia and eastern Delaware County. The Christian – Crescent project is gathering necessary funding, and the Grays Ferry Swingbridge (pictured at top) is under construction.

After more than a decade of tireless advocacy, we got the Ben Franklin Bridge Ramp approved and funded. This fall, construction began, and it is expected to open in the spring of 2019.

Highlighting one of our newer trail advocacy campaigns, we helped organize the Cheltenham Trails Meeting. This meeting was a door buster! Several organizations gave presentations on the importance of trails, and there were two Township Commissioners in the audience as well. Since then, we’ve seen significant progress in Tookany/Tacony – Frankford Trail development, both in Cheltenham and Philadelphia.

Wissahickon Gateway Meeting. We were on hand for Philadelphia City Planning Commission’s meeting to highlight the plans for this key Circuit Trails connection. In addition to closing a trail gap that has vexed city and suburban cyclists alike, Wissahickon Gateway will house a vastly improved SEPTA bus depot and new multi-use development project. Click here for more details.

PA’s TA Set-Aside Funds Several Trails Projects. This funding pot that is administered by the Commonwealth approved funds for projects in all five PA counties in our region, including the Octoraro Trail in Delaware County. Click here for the full list of projects in the Philadelphia region.

Tacony Creek Trail Roosevelt Boulevard Underpass Trail Opening. As we reported late last year at the groundbreaking for this segment, a safe bike/ped connection under Roosevelt Boulevard is now a reality, and has reunited two communities that for generations have been separated by Pennsylvania’s most dangerous road. Unfortunately we weren’t on hand to report on the opening as we were in Milwaukee at the Trail Nation Summit!

The trail that is now The Circuit’s best kept secret opened in June. Connecting a world-class dog park with an even better summertime swimming hole, the Darby Creek Trail’s “Kent Dog Park – Swedish Cabin” segment is now a must see for trail (or rope swing) enthusiasts. Want to check it out this season? Click here for a map link.

Schuylkill Crossing Bridge Project is Underway. Part of a trio of projects that will connect eastern Delaware County, Southwest Philadelphia and Bartram’s Garden with Center City, the “swingbridge” at last started construction.

SRT Sinkhole Gets a Temporary Patch. Those who know it, know it well. The sinkhole under the Chestnut Bridge on the SRT has been a thorn in the side of trail users for years. We put the pressure on to get it patched, pending a permanent fix when the bridge is rehabbed in the near future.

Community Impact Analysis. Bicycle Coalition performed an analysis of Circuit Trails to determine which unbuilt segments will have the greatest impact on their surrounding communities when completed. Our analysis included weighted scores for several categories, including equity, and is meant to be a tool to help county advocates and planners prioritize future projects. 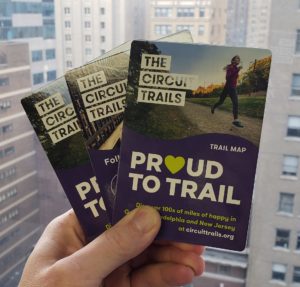 New Circuit Maps! It took months of meetings and design sessions, but we got it done. The Circuit now has a new pocket-sized map that puts everything on one side, and has a foolproof folding pattern. Thanks REI for making it happen! Looking for maps? You can get them by visiting our office, or any REI in the Philadelphia region.

To better coordinate efforts of all of the different agencies and “friends” groups working on trails in lower Montgomery County and Northwest Philadelphia, we held the Northwest Circuit Open House at a packed Manayunk Brewing Company. The event featured new posters from each group that highlighted different projects. It was quite a hit! Click here to view all of the posters on our website.

The Circuit Wins Act 13 Funds. All told, 9 projects got funding from PA’s “Greenways, Trails, and Recreation Program.” Click here for our full list of funding recipients on The Circuit.

NJDOT Saves the Money!! New Jersey has cultivated a terrible reputation for spending federal funds in a timely fashion. It is in fact #1 in the nation in returning expired federal funds to Washington. We helped organize Jersey cycling advocates to perform an email blitz of NJDOT and state elected officials, and it worked! Not only was the original $13 million that was going to lapse get saved, but NJDOT put more money in the pot in the bargain, securing $23 million in total. The Delaware River Heritage Trail was the biggest winner, getting $8.5 million in new funding alone. This will make it possible to safely cross Route 130, which is the most dangerous road for pedestrians in New Jersey. Click here for more details.

Chester County prioritizes getting the SRT connected from Philadelphia to Reading. County officials highlighted a recent breakthrough with Norfolk Southern that will see the 4-mile gap closed in the coming years.

At this year’s Philly Bike Expo, we organized three seminars, all with Circuit Trails implications. Our panel discussion on the status of The Circuit in Delaware County was quite informative and well attended. Click here to view the complete video of the panel. Click here for our blog post about our seminars, which include the slides from each presentation.

This was a big month for trail advocacy in the Philadelphia region. Most notably, we held our first Suburban Active Transportation Forum in Norristown, and it was a bigger success than we could have hoped for! With over 130 attendees and a host of interactive presentations, the happenings in the meeting room really helped to put The Circuit firmly in the perspective of regional transportation connectivity. We had presentations about trail development, but also about connecting road networks, and the human infrastructure (rides, festivals, etc) that drive the bike movement. And that was just inside. We also had test rides of e-bikes and e-scooters happening all day on a closed course in the parking lot. Stay tuned for an announcement about the 2019 forum, which will be held in Camden, New Jersey.

Earlier in November, in what was a surprise to many trail advocates, Delaware County Council announced that it had created $10 million in new open space funding. This pot of funds can be tapped into for “local match,” which is a significant detail. Previously, less wealthy municipalities could not consider applying for many grants, as most require substantial local matching funds. This could be a game changer! We have consulted with one municipality on taking advantage of this funding, and we look to expand this outreach in DelCo in 2019.

Chester Valley Trail West meeting highlights inputs from Bike Chester County members. The CVT West project will have to overcome significant engineering hurdles to reach completion, which have resulted in estimates for completion as long as 15 years from now. Not ones to take this news with a shoulder shrug, Chester County Planning Commission enlisted the help of our county affiliate group to identify the best on-road alternative routes during the trail’s development. Click here for more info.

Circuit Trails 500/2025 Resolutions Update: We were successful in getting the DVRPC, our regional planning organization, to set a goal of completing 750 miles of The Circuit Trails by 2040, which was a notable win. Almost immediately, we realized that 2040 was just way too distant a timeframe to mobilize an effort around. This is how the goal of building 500 miles by 2025 was born. Supported by advocacy from many member organizations of The Circuit Coalition and scores of dedicated individuals, we organized a campaign to get governmental support for the concept. To date, 90 municipalities and 8 counties have adopted the 500/2025 resolution, representing over 5 million people in the Philadelphia region! 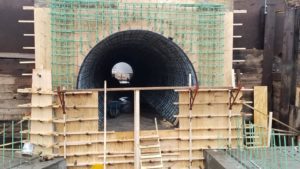 We just learned that two Bucks County trail gaps that has vexed Circuit Trails advocates for years will soon be completed. The D&L trail in Falls Township will soon be able to cross Tyburn Rd and a freight rail line for the first time. More details here.