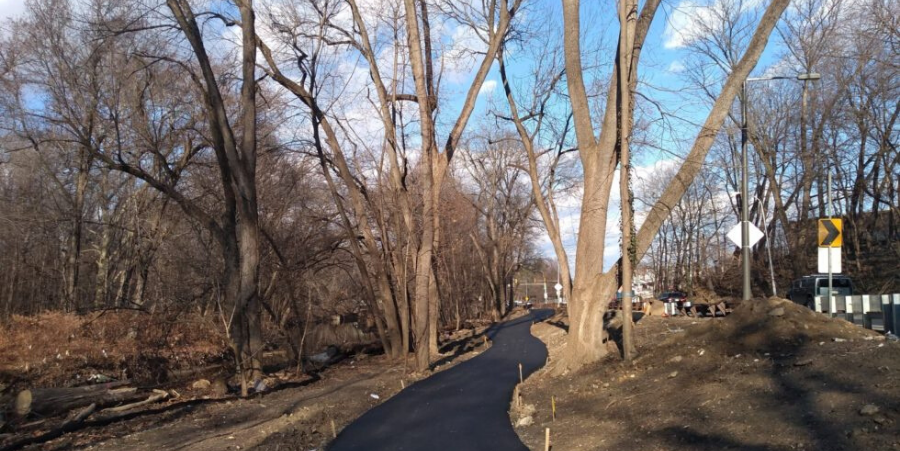 This blog was written by Daniel Paschall, Mid-Atlantic Corrdinator with the East Coast Greenway Alliance, and was originally featured on the Bicycle Coalition of Greater Philadelphia’s blog in January.

The City of Philadelphia constructed an exciting new half-mile extension to the southern end of the Cobbs Creek Trail over the holidays, and although it still has a number of final improvements left before an official ribbon-cutting (likely around March or so), the newly paved trail is usable by the public and looks fantastic.

This trail extension will grow the existing 3.7-mile-long Cobbs Creek Trail along the Philly/Delaware County border to 4.2 miles.

But perhaps the most important feature of the new trail segment is that it provides barrier-protected passage for people walking and biking through the CSX rail bridge underpass. The barrier separation is a seismic improvement over the previous conditions of the Cobbs Creek Parkway CSX underpass, which had no sidewalk, no shoulder, a blind curve, and speeding vehicles, most going well over the 30mph speed limit (see page 15 of the DVRPC study on the Cobbs Creek Parkway corridor from 60th to 70th).

Because the trail narrows underneath the bridge, additional paint, signage, and flex posts are still going to be installed to indicate to trail users to slow down. Additionally, the trail construction included safety improvements for the roadway with a median-aligned rumble strip along the double yellow lines and slightly narrowed travel lanes to make room for the trail.

Ultimately, the city’s plan for the trail will be to continue extending the Cobbs Creek Trail southward in phases all the way to the John Heinz National Wildlife Refuge (https://www.dvrpc.org/webmaps/thecircuit/).

When complete, Cobbs Creek Trail will become a piece of a much larger puzzle in other long distance trails and networks. This includes an ongoing effort to link Valley Forge to the Heinz Refuge as part of the Forge to Refuge Trail, as well as filling out a major branch of the Philadelphia metro region’s 800+ mile trail network, The Circuit Trails.

This project could not have been done without the following organizations: the Clean Air Council; Pennsylvania Department of Conservation and Natural Resources/Bureau of Recreation and Conservation’s Keystone Recreation, Park and Conservation Fund and the Delaware Valley Regional Planning Commission/William Penn Foundation’s Regional Trails Fund

The Cobbs Creek Trail portion starting from its connection to the 58th St Greenway in Kingsessing down to the Heinz Refuge will help complete Southwest Philly’s portion of the 3,000-mile-long East Coast Greenway, a long distance, traffic-separated biking and walking trail in progress, connecting cities and towns down the Eastern US from Calais, Maine to Key West, Florida.

For those interested in improving and beautifying the Cobbs Creek Trail, join the Cobbs Creek Community Environmental Center for their Dr. Martin Luther King Volunteer Service Day on January 18th.